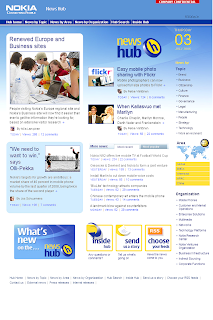 Since this project deals with an Intranet documentation it is confidential, and I can't publish my documentation. Nokia however permitted publication of the screenshot beneath, as it won a usability award in its category. This intranet was one of the first web 2.0 application I designed. It featured cutting edge interaction functionality such as personalisable screen for the users with AJAX modules (i.e. iGoogle style), and highly dynamic linking feature for team members, as well as Flickr integration.

This project won the 2007 Communicators in Business (CiB) for intranet navigation/usability (class winner).